HIGH-SPEED TRAINS: CLOSER TO DUPLICATING THEIR SPEED WITH EVERY ADVANCE

HIGH-SPEED TRAINS: CLOSER TO DUPLICATING THEIR SPEED WITH EVERY ADVANCE 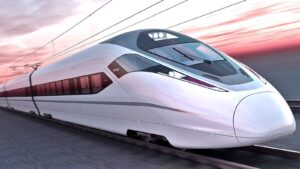 Currently, high-speed trains can be found throughout the world. Without a doubt, Japan is the country that has developed this branch of technology the most. The country is considered a pioneer of high-speed trains. In fact, in 1960 they created a fast line called "Shinkansen," which was capable of reaching speeds of 320 km/h.

Said line ran between the cities of Tokyo and Osaka, which are considered the two largest cities in the country. The line was an idea of the Japanese government, which planned to unite with different international brands.

These brands included Kawasaki, Sumitomo, Mitsubishi and Hitachi, which associated in order to create high-speed routes throughout the national territory.

These companies managed to create lines from the Japanese capital to a large number of connected territories. In addition, they succeeded in improving the trains, now with speeds up to 350 km/h.

Regardless, the Japanese government of 2020 has advanced the idea of reaching even higher speeds on its railway tracks. In fact, it has established a plan with other prefectures to install a line between Yamanashi and Tokyo.

This latest plan will present a component capable of reaching a top speed of 500 km/h. However, said plan will be completed for the year 2027, even though they have many challenges to overcome in order to accomplish this.

In spite of the fact that the project plans have not highlighted a concrete form of action, it is rumored that the technology utilized to drive the machinery will be "magnetic levitation."

The latter means using a large quantity of images that are placed on an opposite metal base. Said technology benefits the train by giving it a much more abrasive lift.

Consequently, the train can reach up to 6440 km/h in terms of speed. Nevertheless, at this point a deceleration occurs, the size of which depends on the weight and width of the machinery that will be used.

Notably, Japan already has this technology in current use in the "JR Maglev," which is a magnetic levitation train which transits from the city of Yamanashi. Because of this, its speed can reach 350 km/h easily. However, the project of the Japanese government is not the only one focused on railway speed.

This is because China has also proposed to increase the ordinary speeds of its high-speed trains. Consequently, China has used the company CRRC, the largest supplier of railway equipment in the world.