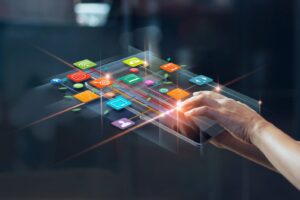 Tim Cook and Sundar Pichai, CEOs of Apple and Google respectively, released this statement through their Twitter profiles. How it will work and when it will start has yet to be decided.

"Google and Apple announce a joint effort that will allow the use of Bluetooth technology to help governments and health agencies to reduce the spread of the virus, putting privacy and security of the user at the center of its conception," said both technological giants in a blog publication.

Smartphones with Apple's iOS software or Google's Android software will be able to exchange information through Bluetooth in order to track human contact ("contact tracking") and alert other users.

Starting in May, users of iOS and Android devices will be able to share content from the official apps of public health authorities, downloadable from the online stores of each respective group.

Apple and Google also plan to develop "a broader contact tracking platform [...] that allows more people to participate if they choose to do so."

The operating systems of the rival groups are the most used in smartphones worldwide.

"Given the urgency, the objective is to implement this solution in two steps, meanwhile maintaining strong protections to protect the privacy of users," pledged Apple and Google.