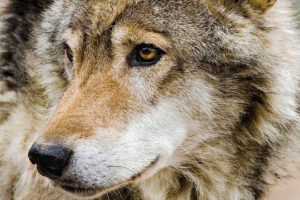 The wolf (Canis lupis) is a placental mammal of the carnivore family. The domestic dog is a member of the same species based on different criteria, DNA-sequencing and other genetic studies. Wolves were once abundant throughout North America, Eurasia, and the Middle East. Today, for a number of reasons related to human activity, including hunting, wolves inhabit only a very small portion of what was once their territory.

Even though the wolf is classified as a species with little threat to its extinction, in some regions, including part of the continental United States of America, the species is listed as in danger or threatened. Wolves are hunted in many parts of the world for the threat they pose to livestock.

The wolf is a predator present in a large number of ecosystems. The vast territory size and number of habitats where wolves thrive reflect its adaptability as a species, since it can live in forests, mountains and grasslands.

The weight and size of the wolf varies considerably throughout the world, and tends to increase proportionately with latitude. In general, its height varies between 60 and 90 centimeters from the shoulder, and its weight between 32 and 70 kilos. Even though they are rarely seen, wolves more than 77 kg have been found in Alaska and Canada. The heaviest wild wolf ever weighed was killed in Alaska in 1939 and weighed 80 kg. There are still unproven cases in the northeast of Russia of hunted wolves that reached 100 kg. The smallest wolves are a sub-species of Arab wolves, and the females weigh about 10 kg at maturity. Females in a population weigh about 20% less than males. Wolves can measure between 1.3 to 2 meters from the snout to the tip of the tail.

The four upper premolars and the first lower molars are its carnivorous teeth, essential tools for cutting meat. Long canine teeth are also important, as they evolved to hold and immobilize prey. Therefore, any injury to the jaw or teeth is perilous for a wolf, and could mean the wolf's disability or death.

Wolves principally feed on sheep, goats, chamois, pigs, deer, antelope, reindeer, horses and elk. Other prey, incredibly enough, includes marine mammals like seals and beached whales. In times of scarcity of food sources, cannibalism has been documented among wolves. Lone wolves rely most on small animals they can hunt by jumping on top of them and holding them with their front paws, although there are cases of lone wolves documented to have hunted large animals using other methods. In a rare case, some wolves in Alaska also feed on salmon.

Wolves also hunt rodents, birds and other small animals. A wolf can eat between 3.2 and 3.5 kilos of food in a single feeding, though they can eat up to 13 and 15 kilos when hungry. Its annual dietary requirements are around 1.5 tons of meat, though they can survive long periods without eating. There is a case in a Russian registry of a wolf that survived 17 days without food. Studies have shown that two weeks without feeding does not weaken the wolf's muscular activities. After eating, wolves will drink copious amounts of water to prevent uremic problems. The wolf's stomach can hold 7.5 liters of water.

Wolves often group up in packs that follow a strict social hierarchy. This high level of social organization was believed to have led to their success in hunting, yet recent theories suggest that such organization is more related to reproductive success in the species.

The pack is led by two wolves at the top of the social hierarchy: the alpha male and the alpha female. The alpha couple has great freedom compared to the rest of the pack. Although they are not leaders in the human sense of the term, they help calm disputes within the pack and have great control over resources, such as food, and even more importantly, the alpha couple keeps the herd together. Because of their strong instincts for companionship, the rest of the pack usually follows them.

While the majority of alpha couples are monogamous, exceptions exist. An alpha animal may prefer to pair with an animal lower in the hierarchy, especially if it is related to the other alpha. The death of one of the alphas does not affect the status of its partner, which will find another mate rapidly.

Reproductive instincts drive young wolves out of their birth packs, going off in search of mates and new territory. Dispersion occurs at all times of the year, typically from wolves that have reached sexual maturity in the previous breeding season. During the mating season, reproduction makes wolves very affectionate in anticipation of the female ovulation cycle. In general, tension in the pack grows as each mature wolf feels the impulse to mate.

When the alpha female is in a period of sexual receptivity, which occurs once a year and lasts 5 to 14 days, she and her partner will spend a large amount of time in isolation. Pheromones in the female's urine and the swelling of her vulva inform the male of the female's condition. The male's penis contains a bone formation known as the penile bone, which facilitates the initial penetration of the female and also maintains rigidity prior to full erection.

The male will mount the female firmly from behind. After sexual intercourse is achieved, the two wolves form a connected link once the bulbus glandis, a male's erectile tissue located near the base of the penis, expands and the female's vaginal muscles contract. Ejaculation is induced by the thrusts of the male's pelvis and the undulation of the female's cervix. It will last between 10 and 30 minutes, during which the male will ejaculate multiple times. After the initial ejaculation, the male raises his legs over the female, both of them facing opposite directions. It is believed to be a defensive measure since one guards the other's back. The mating ritual is repeated many times throughout the female's short ovulation period.