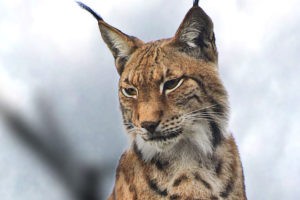 This feline has a graceful appearance given its long legs and short tail with a black tassel at the tip, usually held upright, but in motion in moments of danger or excitement. Its characteristic pointed ears are tipped with stiff black hair, adding to its camouflage by dissembling the round silhouette of its head.

The sideburns growing from its cheeks are also characteristic. They appear after its first year, barely growing below the chin, and increasing in size with age. Males of the species have longer sideburns and black ear tips than females.

There are three kinds of fur:

The Iberian lynx is the only carnivore that specializes in rabbits, in fact, the species comprises 80 to 90% of its diet. It also feeds on partridges, small mammals and birds. The composition of prey in their diet also varies according to season and which prey are available in the area.

The main threats to the species are created by humans, especially from vehicle accidents, but also directly from poaching, installation of traps and ties directed at other species, illegal poisoning, etc.

Since 2000, 57 lynx have died in Doñana, 24 of which were run over by cars. The mortality rate is high on the roads that connect Matalascañas with nearby towns. The figure is high when we consider that no more than 50 lynx inhabit the park. Four out of ten lynx that have been run over die on these roads, since the roads cross an area the lynx frequently move through.

The reduction in the rabbit population is due to myxomatosis, viral pneumonia, as well as intensive livestock farming, which consequently over-exploits of the herbaceous land layer, which the rabbits feed on. This in turn, limits the rabbit population and affects Iberian lynxes, so intensive livestock farming is also a threat to consider. To prevent animals like the lynx from being hit by cars, "ecoducts" have been installed. Ecoducts, or green bridges, are plant-covered bridges for wild animals to cross a road or railroad.

The Iberian lynx was declared an endangered species in 1986 by the International Union for Conservation of Nature (IUCN). Its status was maintained in periodic reviews until 2002, when its threat category was increased to "critically endangered." It is the only species of cat listed in this category on the IUCN Red List.

The Iberian lynx makes its burrow in well protected, hidden places, like hollow trees. Its gestation lasts from 65 to 72 days, following which the species gives birth between March and April. Lynx litters usually consist of one to four pups, with two being the most common litter size. When the pups are four weeks old, the lynx mother changes her burrow for another. From two months onward, the cubs accompany their mother on hunts. The lynx becomes independent at an age between 7 and 12 months, but they remain in their native territory until 20 months. The average survival rate of cubs into adulthood is between on and two per female.