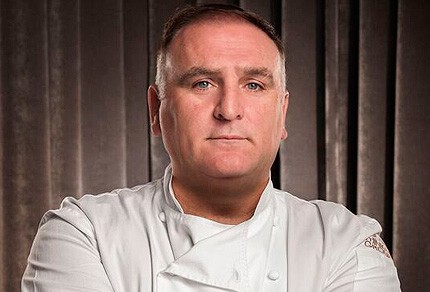 Asturiano de Mieres, his family moved to Barcelona when he was a child. At the age of fifteen he entered the School of Catering and Hospitality. At that stage, he combined formal studies with the experience of working at the El Bulli restaurant, which was already run by Ferran Adrià at the time.

At the age of 21, he decided to go to the United States. In New York, she started working at the El Dorado Petit restaurant. After that experience, she went to the capital Washington, where she settled and continues to live. Currently, she oversees several highly prestigious and successful restaurants in Washington, which share Latin specialties in general and Spanish in particular. The chef is immersed in the Bazaar restaurant project in New York, designed by Philippe Starck.

José Andrés is the supervisor of the specialties of Café Atlántico, a restaurant inspired by the cuisine of Latin America, Jaleo Restaurant was the first to introduce tapas cuisine in the United States, Zaytinya, Greek-Turkish cuisine; Oyamel, traditional Mexican cuisine; and a minibar by José Andrés, signature cuisine and restaurant in a small space.

Between 2005 and 2007 he directed and presented a weekly cooking program on TVE, a very successful daily program on RTVE afternoons.

In November 2013 he obtained US citizenship, after having resided and worked in the country for 23 years.